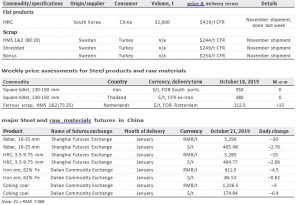 Turkish mills are still interested in purchases of scrap. Information about a new con- tract for imported scrap signed in Turkey at the end of last week appeared in the market. The price for the material from the Baltic region remained firm.

A Karabuk-based mill booked from a Swedish exporter a mixed batch of scrap with HMS 1&2 (80:20) priced at $244/t CFR. Shredded and bonus/busheling material was sold at $249/t CFR and $254/t CFR within this lot, Metal Expert learnt. With the recent deal, the price for HMS 1&2 (80:20) from the Baltic region remained almost in the range of previous contracts, only with a slight increase from the $243.50/t CFR Turkey,  fixed  last  week.

Scrap purchases are likely to liven up in Turkey this week. “Some mills still need to buy cargoes for November shipments, I expect a slight increase in new deals,” a market source told Metal Expert. “Most sellers continue to insist on higher prices,”.

After a significant price drop in October rebar sales, Emirates Steel Industries (ESI), a key UAE producer and one of the largest in the GCC, decided to keep the prices for November flat. At the same time, the long steel demand remains limited, put- ting pressure on suppliers.

$473/t (AED 1,737/t) EXW, Metal Expert learnt. It is considered by market players as not very supportive, especially for re-rollers, whose margin has been narrowed by cuts in the semis and finished steel segments. At the same time, sources admit that “it is better than reduction.”

Other suppliers traditionally follow the same price policy. In particular, Canarese and Union Iron and Steel Company have already announced the price at $472/t (AED 1,735/t) EXW. Hamriyah Steel prefers not to give firm offers, sticking to the level a bit lower than $472/t (AED 1,733/t) EXW. Qatar Steel FZE is in the market now with $471/t (AED 1,730/t) EXW. However, market insiders admit that despite stable official offers it is almost impossible to sell rebar at the announced levels as general demand is not good. Moreover, in the previous round of sales for October shipment, deals were done at much lower prices, down to $449/t (AED 1,650/t) CPT from re-rollers, Metal Expert reported. “Price in actual deals will depend on the scenario.

Omani suppliers are also offering rebar to the UAE these days. Jindal Shadeed is quoting $463/t (AED 1,700/t) CPT with deferred payment for 90 days, and some additional discounts possible depending on volumes. Another Omani supplier kept the official offer to the UAE stable at $457/t  (AED  1,680/t)     delivered. 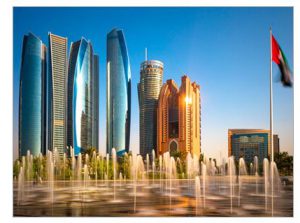 Despite some interest in wire rod purchases in the UAE, the segment witnessed a notable price drop from the market leader Emirates Steel Industries (ESI) with stiffer competition being one of the key     reasons.

ESI reduced its domestic wire rod price for November shipment by $15/t to $480/t delivered. While the local demand for the product is present, it is not enough for everyone who wants to sell, especially after the newcomer United Steel Industries FZC (USI) burst into the segment with a rather aggressive price policy aiming to catch buyers, Metal Expert learnt. USI is offering its product within the range of

$465-480/t EXW depending on grade and volumes. “Each mill tries to secure its position and a better price is one of the instruments to reach the goal amid insufficient demand.

Another well-known wire rod supplier, Qatar Steel FZE, is also ready to struggle for its piece of the market pie. The producer targets $470-475/t EXW in offers, but if orders are firm and large, is also ready to discuss the terms of cooperation.

Fujairah-based USI recently closed a deal for a small volume of wire rod at $475-480/t delivered in the UAE. Moreover, the company successfully tested the waters of Saudi Arabian and Bahraini markets, having sold products for November delivery at $525/t CPT and $515/t CPT respectively.