economic hardships, which Lebanon has been facing over a couple of years, continue to affect steel business. Slower construction activity resulted in a lower volume of steel imports during January-September 2019. Prospects for the whole year are not optimistic either.

Total steel imports to Lebanon dropped by 25.7% to 621,674 t year-on-year in the reported period, according to the Lebanese Customs Administration. Both long and flat steel segments demonstrated negative dynamics, weakening by 31.8% to 434,341 t and by 5.5% to 172,137 t respectively on annualized base. “economic cri-

sis hits all businesses. Movement is possible in the flat steel segment because HRC and other products are used for cutting to sheets or slitting to strips for tube-making, but longs are not highly demanded due to weak construction,”. 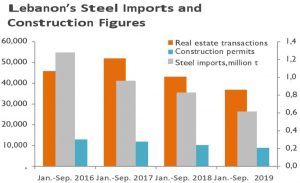 Architects of Beirut and Tripoli

The number of real estate transactions in Lebanon

Further situation with steel imports to Lebanon does not seem bright, taking into account big difficulties with foreign trade operations and payments. The crisis deepened in mid-October when the nationwide protests for urgent reforms took hold of the country.

* – including other products, which are not mentioned in the table Source:  Lebanese  Customs  Administration.