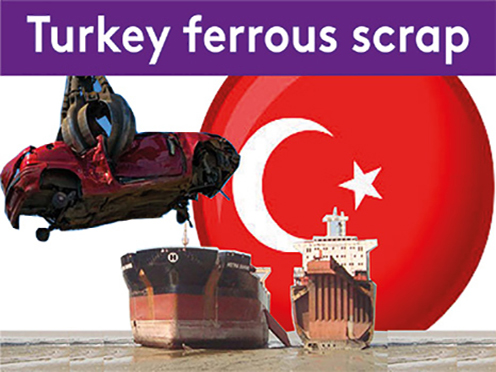 turkey / Scrap
Prices for imported ferrous scrap are unchanged in Turkey as the market is calm. Trade activity is expected to increase later in the week.The price assessment for HMS 1&2 (80:20) from the US East Coast stays at $294/t CFR Turkey on July 16.Turkish scrap buyers are quiet now, but many of them need cargoes for August shipment. “Mills decided to wait a few days as scrap suppliers insist on higher prices, but a number of purchases are anticipated,” a trader told Metal Expert. US and Baltic recyclers target minimum $300/t CFR Turkey for HMS 1&2 (80:20), and European recyclers at least $295/t CFR for HMS 1&2 (80:20).The most recent bids in Turkey were heard late last week. Mills were looking for American HMS 1&2 (80:20) at $290-294/t CFR, for Baltic analogue at $288-292/t CFR and for European HMS 1&2 (75:25) at $285/t CFR, Metal Expert learnt. Most scrap exporters were not interested. They are still firm due to the limited availabili- ty of cargoes and prefer to wait for higher bids.

Domestic rebar prices under pressure in turkey after holidays turkey / long products
Slight changes in the Turkish lira rate as well as weak demand continue to shake domestic rebar tags. The uncertainty in the scrap import market adds even more pressure.Most Turkish producers are offering rebar today at $460-470/t EXW with some higher levels of up to $475/t EXW available, mainly in Marmara, versus $465-475/t EXW at the end of last week. “Today, you can sell rebar only at the lower end of the range. The only question is whether it is beneficial to the manufacturer or not,” a local source told Metal Expert.Izmir-based IDC has announced its domestic offers at TRY 3,180/t EXW, upTRY 30/t since last week, which translates to $472/t EXW, according to the cur- rent lira rate against the US dollar. Turkey’s largest rebar producer ICDAS made the same move before the weekend to offset currency fluctuations and now stays at$475/t EXW, Metal Expert understands.

The downward trend continues in the Turkish HRC segment. While the weak sentiments keep pressuring the producers, the competition for orders from overseas buyers aggravates the situation, with mills reported to prefer a more aggressive approachthese days.HRC quotes moved to $440-450/t FOB at the end of the third week of September, losing $10/t from the previous numbers. While the upper limit is said to mainly reflect official offers, the workable level is generally reported as $440-445/t FOB with some trading heard within this range, specifically to the EU, Metal Expert has learnt. November shipment coils prevail in the    segment.Although the producers are ready to make discounts in order to sell, the circulated information about $430-435/t FOB as a general market range is believed to be premature and aimed to add pressure on the segment, some insiders believe.domestic HRC slid to $450-460/t EXW in Turkey versus $455-465/t EXW previously.Activity slowed down in the import market. “Offers of Russian HRC is coming   up   to $455/t CFR with which they have no chance to sell,” said one of the sources. As Metal Expert reported, a recent deal for MMK big coils was closed at $445/t CFR Turkey. Ukrainian coils are nominally priced at $435-440/t CFR.

Ferrous scrap purchases continue in the Turkish market with new deals from Europe and the UK.One Iskenderun-based mill reached an agreement with a supplier from Belgium, who sold 15,000 t of HMS 1&2 (75:25) and 15,000 t of bonus material at an average price of $236/t CFR on September 19. The cargo is due to be shipped in the first half of October, Metal Expert   learnt.The same Iskenderun-based mill bought HMS 1&2 (80:20) at $228/t CFR and bonus scrap at $240/t CFR from a Netherland-based exporter the same day.A Marmara-based mill closed a deal with a seller from the UK at $223.5/t CFR earlier.The price assessment for HMS 1&2 (80:20) from the US East Coast stays at $235/t CFR Turkey on September20.