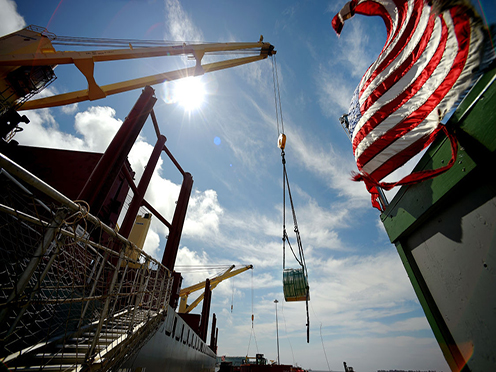 GM strike continues with no agreement in sight

The United Auto Workers (UAW) union members have been on the largest since 2007 strike for five days already, forcing General Motors (GM) to give workers bet- ter contract terms and ensure continued operations at the plants.The protest that gathered almost 50,000 workers from 31 factories started early Monday, September 16, as the UAW was unsatisfied with the new contract terms offered by GM, which included wage increase, new jobs and a plan to save  the plant in Detroit. The union however did not accept the offer. Apart from wages and benefits issues, the UAW wants that the four plants GM was going to close remain open and producing, Metal Expert learnt.GM, in its turn, decided to close the plants (with the one in Ohio already idled since March), which could help boost cash flow by $6 billion by 2020 to be able to invest in technology for electric and self-driving vehicles, and better prepare the company for a possible decline in car sales in the US.Meantime, US new cars and light trucks sales increased by 11% to 1.65 million units  year-on-year in August, with a year-to-date number staying unchanged from January-August 2018 at 11.5 million units, according to Mark Lines data center. GM’s sales increased by 21.3% to 289,475 vehicles y-o-y in August, Metal Expert learnt.GM is reportedly losing $50 million to $100 million a day due to the strike. The stoppage of operations at GM is affecting suppliers along the value chain, including steel product deliveries needed for making car bodies and parts, sources say. This crisis is adding to already challenging situation in the US automotive industry and  in other steel consuming sectors. The largest US steel mills, including U.S. Steel, Nucor and Steel Dynamics, issued profit warnings for Q3 amid the unfavorable market  conditions,  Metal  Expert reported.Nobody can say for sure how long the negotiations between the UAW and GM will last, as the union said that “despite progress there are still significant differences between the two sides.” US other top auto maker, Ford and FCA, are also waiting for the outcome of this situation as the new agreement, when reached, will be used as a pattern in their own talks with the UAW.

Trinidad and Tobago’s government does not give up attempts to restart ArcelorMit tal’s idled steel plant in Point Lisas Industrial Estate.On September 13, Point Lisas Chamber of Commerce held a meeting with the stakeholders and creditors of the plant related to the current situation of the plant and the possible way out. However, they failed to reach a consensus on a restart plan, the local media reported. A second meeting is expected to be held soon. The Chamber of Commerce is considering Macarri Steel Holdings among the possible owners, which “possesses both the capability and the financial wherewithal to re- start the plant,” Metal Expert learnt.As it was reported earlier, the plant was idled in November 2015, as ArcelorMittal  made a decision to liquidate the business due to “a combination of local and inter- national challenges,” which drove the plant deep in losses. It is capable of producing DRI (2.7  million tpy),  square billet (1  million tpy)  and wire rod (700,000    tpy).

Brazil’s largest steelmaker Usiminas agreed to invest around $53 million in its steel- making and mining activities in the Minas Gerais state.On September 18, Romeu Zema, the governor of Minas Gerais, and Usiminas, along with its subsidiaries Mineracao Usiminas S.A. and Unigal Ltda., specializing in HdG steel products, signed a memorandum of understanding (MoU) which provides the commitment of the latter to invest BRL 219.8 million ($52.7 million) in steel and mining projects in the state of Minas Gerais, according to the company’s official statement. The most part of the investment will be spent on BF No.2 maintenance works and operational improvement of the Ipatinga plant, Metal Expert learnt. The BF revamp is expected to extend the furnace life by 20 years.The MoU further provides that this investment should generate 330 direct jobs  in 2019. The amount does not change Usiminas’s projections for investments thisyear, which are expected to be around BRL 800 million ($192 million), Metal Expert learnt.The secretary of state for economic development, Vitor de Mendonca, believes  that the step will strengthen the steel industry. “[It] is an interesting milestone be- cause this amount invested will allow us to upgrade the Usiminas plant, create jobs and mark the resumption of the steel industry, which has been experiencing market problems,” he said. Usiminas president Sergio Leite mentioned also a partnership between the company and the Minas Gerais government. “Company and state are working together to develop, create  jobs and revenue for mines,”  he    said.Usiminas has a crude steel capacity of 9.5 million t, of which 5 million t in Ipatin- ga and 4.5 million t in Cubatao. The steelmaking operation at the Cubatao unit are temporarily suspended and currently it processes the acquired slabs. Musa, inwhich Usiminas owns 70%, holds four mining assets in the Serra Azul region (Minas Gerais), with a capacity to produce 8 million tpy of iron ore.